Animation & Explanation made by BIGS 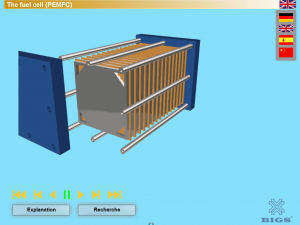 The animation starts with a click on the picture.
In this animation change the setting from German to English or in a other Language first. The animation is also available as an app at:

A Controlled reaction takes place in the schematically depicted fuel cell of Hydrogen and Oxygen into water- molecules if the electrodes get connected. The reaction rate is proportional to the current or so to say the resistance between the poles determines the conversion rate of hydrogen and oxygen. A current runs due to the electrochemical potential and the resulting potential difference between the electrodes which reaches the theoretical value of 1.2 V between the cathode and the anode.

More information:
These reactions proceed as follows: Molecular Hydrogen reaches by diffusion the anode which is made of a noble metal (usually titanium). The anode take effect as catalyst and divided the hydrogen into positively charged ions – protons ( H+) and free electrons (e–). The protons move through the membrane, whereas the electrons create a current trough the external circuit. At the cathode the oxygen reacts with the protons and electrons to water. Again the reaction is accelerated by means of a titanium catalyst.

The circuit is closed that way by production of the only “waste” as by-product – namely water.

A single fuel cell shows a voltage of about 0.5V and a power of about 1 W / cm2. The efficiency of a fuel cell can be estimated directly from the voltage as the exchange rate of the fuel is solely dependent on the current.

The efficiency of fuel cell is about 90% which compares quite well to efficiencies of other electricity production methods which hardly exceed 35%.

If you require more information, then click on the link below directly to Amazon: